Following ower conversation, to survive to this incident I had a lot of luck,
good reflexes, but mainly an efficient reserve chute Mayday 16 SLT and solid resistance from the reserve,
the harness, and my old body… I have a few more grey hairs but I’m happy to be alive! 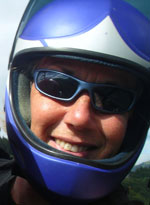 THANK to YOU to have build this little reserve strong enough. It saved my life.

A lot a persons feel concerned and discuss without to have all the information. I decided to send back the glider to…….., the harness to……., the GPS to….. ., and the reserve to Xavier Beauvallet, and I am going to write an article describing my story, a witness for the other pilots. The goal is not to incriminate any material but encourage the pilotes to check lines and connections and to prevent other accidents because … I’m not the only one to have fine lines, not bright new, and people having walk on them.

It happened at Sederon (site: Buc) in front of pilots folding their wing at sunset. After a short restitution flight (18min), I did barely one 360 on the right (71,5km/h horizontal speed) when the lines broke on the right side, 2 lines first, then all, then all the left side… the whole thing in less than 3sec. I react as quickly as I could to find the handle before loosing my balance, fortunatally the reserve was attached to my Karabiners because the shock at the opening was enormous… the force and the noise let me think the chute was going to break (or the harness) but … it resisted the very brutal deceleration. Before the opening, I was falling at 212km/h of vertical speed, sitting down in my harness profiled by the airbag (the analogic memory flight of my Compeo indicates a max vertical speed of -58,8m/sec…, more than skydiving). … I arrived in a gully (the grande Combe) preparing myself for a really hard landing and I’m happy to have not broken a leg.

I estimate the chute opened at between 80 and 60m height, the vertical speed was higher than my former reserve (with a pull down apex)… it means it was a question of 1,2 second, to die or not. I can be happy to have only a little physical injury (heel injured, and sore back) and hope I will continue to have fun flying (it’s a big part of my life). I will certainly be very careful with the material I chose to fly with.

The reasons of the rupture on the glider are still to be analysed … as usual the accident was an accumulation of risks; an addition of different factors – fine lines of a demo Mercury, aging of the lines, deterioration from heating when I had a frontal last year or possibly from damage when somebody walked on the lines, on a stony take off, the flight before …. or other explanations yet to be explored.

The rupture started because the increasing load into a 360 (but I did a series of 360s descending 11m/sec at Chamonix 2 weeks ago, longer and stronger without rupture)…..