From: “Surfair” To: Apco Aviation Sent: Saturday, March 14, 2009 11:49 AM Subject: One more life saved by Mayday Hello Apco Factory, One of your Mayday 18 saved one of my customers. Two days ago, he was flying in the Pyrénées, hard conditions, on lee side, violent collapse and instant rotation with dive, at 60 m from the…
END_OF_DOCUMENT_TOKEN_TO_BE_REPLACED

From: Andrew Craig To: Apco Aviation Sent: Wednesday, November 14, 2007 12:34 PM Country: uk Just a quick note to say thanks; last month I was flying over Bir, India, when a big accelerated collapse turned very quickly into a spiral dive with twisted risers. My Apco Mayday 16 popped out perfectly, and brought me down at…
END_OF_DOCUMENT_TOKEN_TO_BE_REPLACED

From: Lev Manouvakhov  To: Apco Aviation Sent: Sunday, October 09, 2005 6:51 AM Subject: Mayday Save Hi Anatoly. Everything is fine. But I’ve forgotten to thank you for the excellent design of the APCO’s reserve – the MayDay . The 12 years old MayDay-16 saved my friend’s life ( he has 4 kids…). The accident…
END_OF_DOCUMENT_TOKEN_TO_BE_REPLACED

Dear Anatoly, I write you because I recently suffered an emergency in flight with my paraglider and had to throw my emergency parachute. It’s an Apco Mayday 16 I think, which I bought about 7 years ago from my instructor and friend Jens Tannen, in Chile. Everything went fine, the chute opened and I’m ok…
END_OF_DOCUMENT_TOKEN_TO_BE_REPLACED

Mayday rescue May 19, 2003 – sunny, cool Canadian Spring day. Nice flying conditions We are used to receiving many reports of life-saving Mayday deployments in emergency situations, as there are quite a few Maydays in pilots harnesses by now. However having Mayday 18 safely bringing down 2 pilots is a rare occurrence and we…
END_OF_DOCUMENT_TOKEN_TO_BE_REPLACED

Dear APCO, I pulled my 9 year old Mayday 16 in anger last month over Lake Annecy France, in a spin aboard Advance Sigma4. I’ve never deployed before, but it did the business perfectly. Many Thanks, Dan Ashworth
END_OF_DOCUMENT_TOKEN_TO_BE_REPLACED

From: Justin Kyllo To: apco Sent: 01 October, 2000 07:56 Subject: Reserve deployment I just wanted to thank APCO aviation for the excellent design of the mayday reserve. This summer while flying in Golden BC Canada, I had gotten into a situation where my glider went into a spin after I flew low over some…
END_OF_DOCUMENT_TOKEN_TO_BE_REPLACED

From: Carlos Fernandez To: apco Sent: Wednesday, June 02, 2004 11:59 PM Subject: mayday Dear Sirs I would like to report you the use of a Mayday emergency parachute Serie 424787. It happend on June 1st. 2004 during a flight from the top of the Pichincha mountain in Quito Ecuador. The altitude was 3.800 m…
END_OF_DOCUMENT_TOKEN_TO_BE_REPLACED

From: Matthew Key To: apco Sent: Tuesday , July 27, 2006 8:34 AM Subject: mayday Dear APCO Team, I am sending you an incident report on my reserve deployment in North Cyprus in September 2004. I have done 80 flights, 59 of these from 750mt. On the day of deployment I had been thermalling for…
END_OF_DOCUMENT_TOKEN_TO_BE_REPLACED

From: Mustafa Senem To: apco Sent: Thursday, February 03, 2005 10:55 AM Subject: Reserve Deployment Dear Sirs Your Mayday reserve is a beautiful piece of equipment. It did everything as advertised and saved my life this weekend – THANKS!!!!! Mustafa Senem
END_OF_DOCUMENT_TOKEN_TO_BE_REPLACED

From: Jeffrey Hillman To: apco@apcoaviation.com through Carlos Rafael Sent: Tuesday , Nov 18, 2006 15:52 Subject: Reserve deployment Hi Carlos, Just to let you know that my purchase of a Mayday 18 earlier this year turned out to be a good idea. I flew into a dusty at the De Aar fun comp at about…
END_OF_DOCUMENT_TOKEN_TO_BE_REPLACED

From: “Michèle Baptist” To: Apco Aviation Sent: Friday, September 05, 2008 1:03 AM Subject: Rescue in free fall Bonjour APCO, Following ower conversation, to survive to this incident I had a lot of luck, good reflexes, but mainly an efficient reserve chute Mayday 16 SLT and solid resistance from the reserve, the harness, and my old body… I…
END_OF_DOCUMENT_TOKEN_TO_BE_REPLACED

From: “Surfair” To: Apco Aviation Sent: Saturday, March 14, 2009 11:49 AM Subject: One more life saved by Mayday Hello Apco Factory, One of your Mayday 18 saved one of my customers. Two days ago, he was flying in the Pyrénées, hard conditions, on lee side, violent collapse and instant rotation with dive, at 60 m from the…
END_OF_DOCUMENT_TOKEN_TO_BE_REPLACED

Posted by “Vulcan” Source: Paragliding Forum Date: Monday, Feb 10, 2014 06:32 AM Subject: Finally used my reserve… After 15 years of XC flying around the World I was beginning to think that carrying a reserve was a waste of time. Especially as nearly all the reserve throws I have seen were unnecessary i.e. the wing wanted to fly…
END_OF_DOCUMENT_TOKEN_TO_BE_REPLACED

From: Steve Hill To: apco Sent: Tuesday, April 26, 2011 3:56 PM Subject: Reserve Deployment Hi, I was flying with your lightweight 18 reserve in Porterville SA and had to pull it. It worked first time, so many thanks for saving me…… Many thanks Steve
END_OF_DOCUMENT_TOKEN_TO_BE_REPLACED

From: Ray Dauphinee Sent: Friday, August 12, 2016 6:55 PM Country: canada To: apco Subject: Saved by my Mayday Hi guys. Just a quick note to say thank you for making such a reliable reserve chute. Yesterday, I needed it. I had a collapse on my paraglider and threw my reserve. I was at an altitude…
END_OF_DOCUMENT_TOKEN_TO_BE_REPLACED 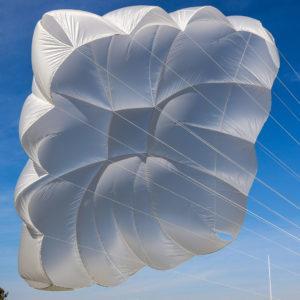 Apco Aviation started manufacturing the Mayday reserve parachute in 1984, and since then put over 30 000 pieces into service in the Paragliding and Hang Gliding markets. The Mayday has hundreds of life saving deployments to its name, from beginners to world champions ( Read letters from saved pilots).

The Mayday Square follows in the proud tradition of the Mayday Range, and is built to the same exacting standards that has made the Mayday range the benchmark of all reserve parachute systems.

The advantage of the square design is that it gives a more stable descent (less pendulum effect), and therefore has a lower sink rate!
The Mayday Square is compact in size and weight, making it both the lightest Mayday in our range, and our highest rated gr/kg rating at 9.16 grams for each Kg of load @120kgs.
This makes it a very attractive package for pilots concerned about the weight of their kit.
The Mayday Square is certified to EN standard at 100 [kg] with sink rate of ~5.4 [m/s].
In addition, the Mayday Square has been load tested to 120 [kg] with sink rate of ~5.6 [m/s], perfect in cases where higher load is required (Paramotor pilots) at the expense of a slight increase in sink rate.
It is currently available in one size, with a short dyneema bridle, for paragliding or Paramotoring. 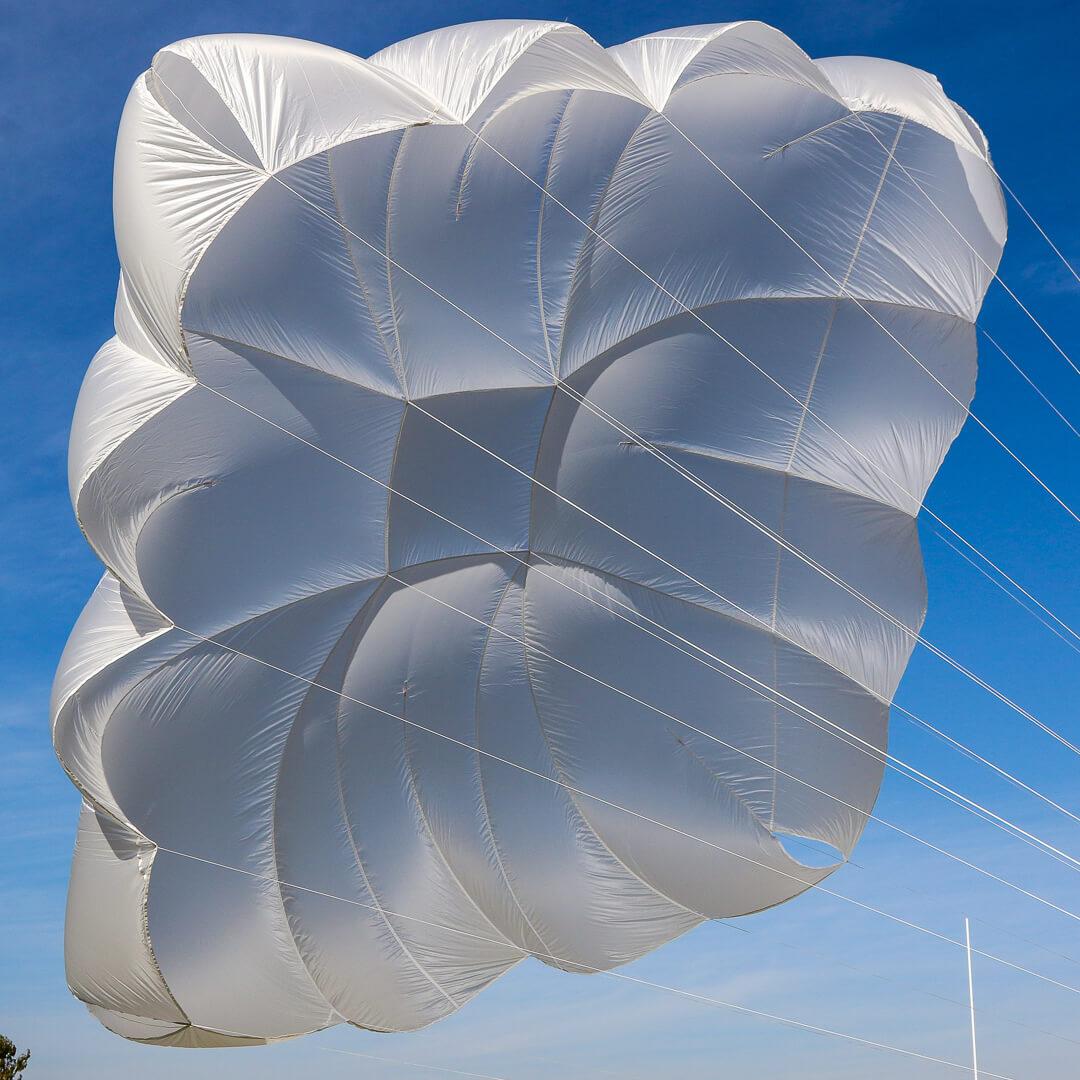 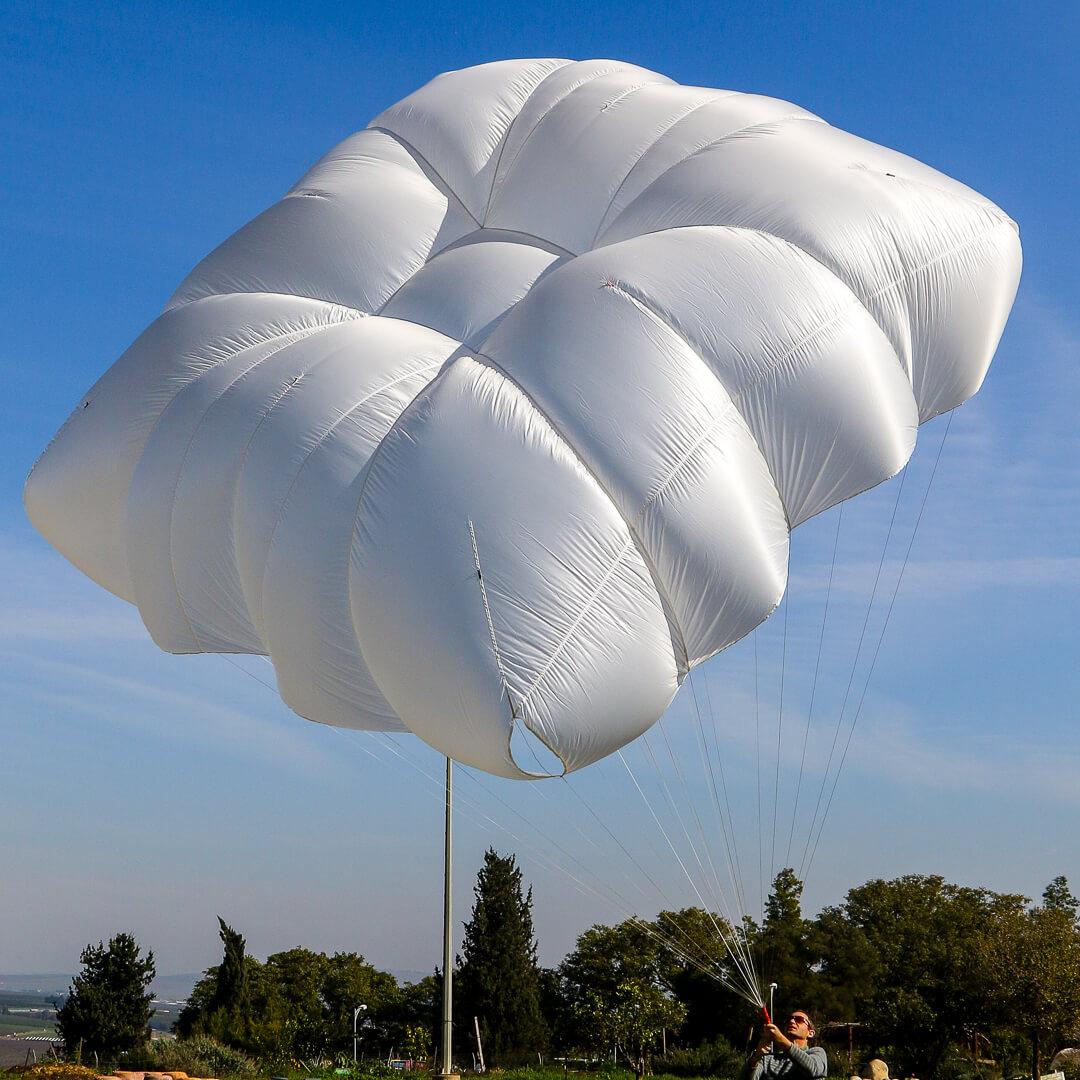 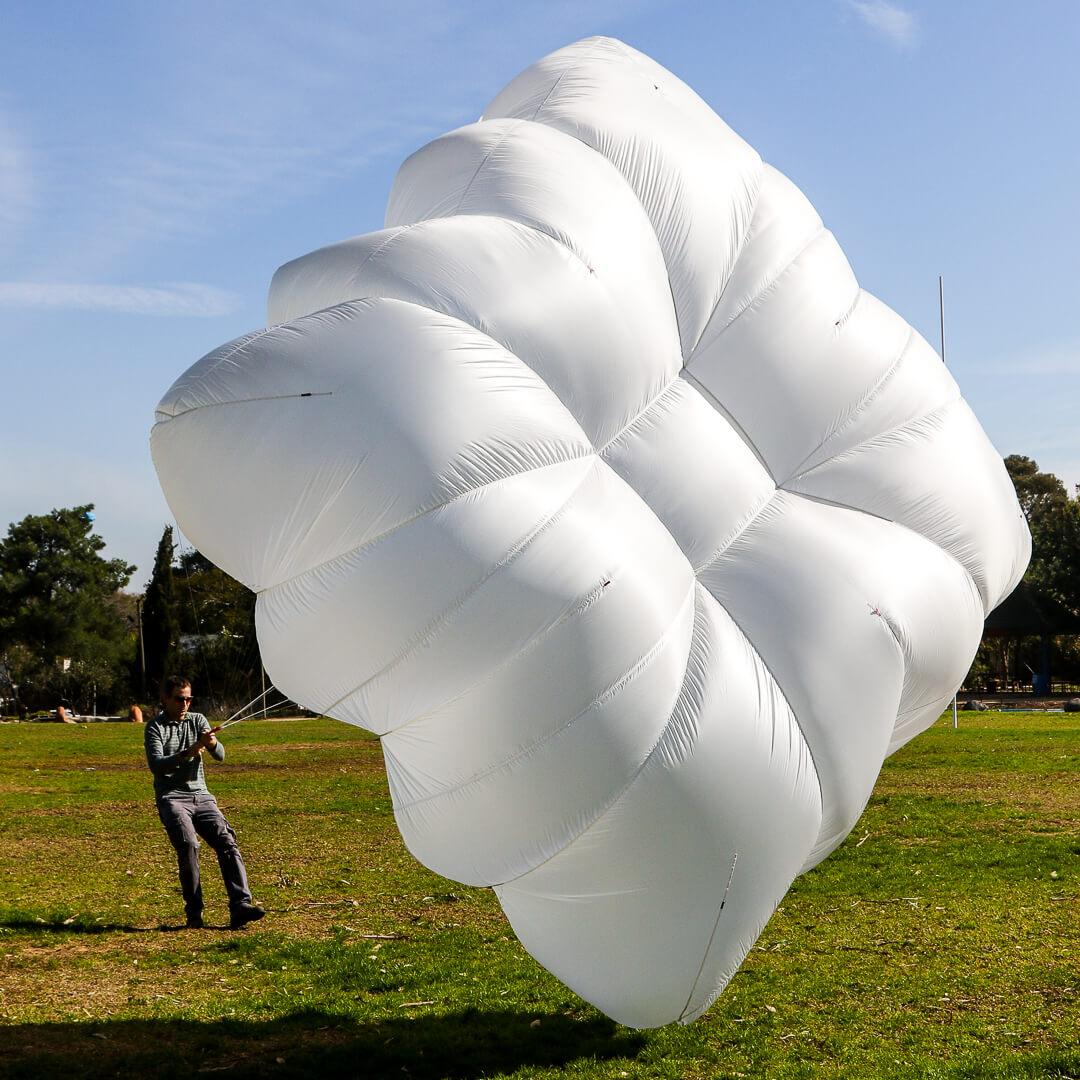 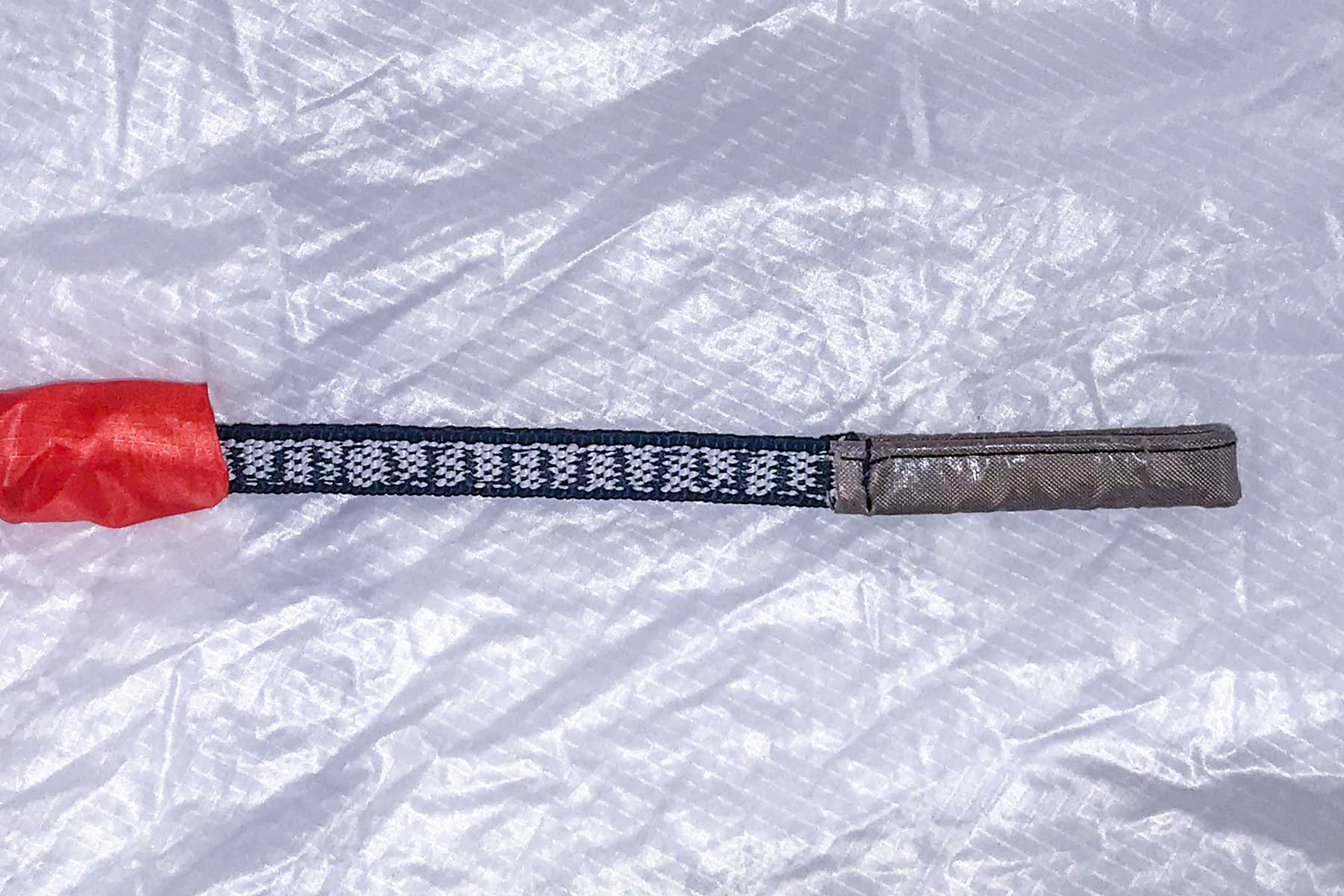 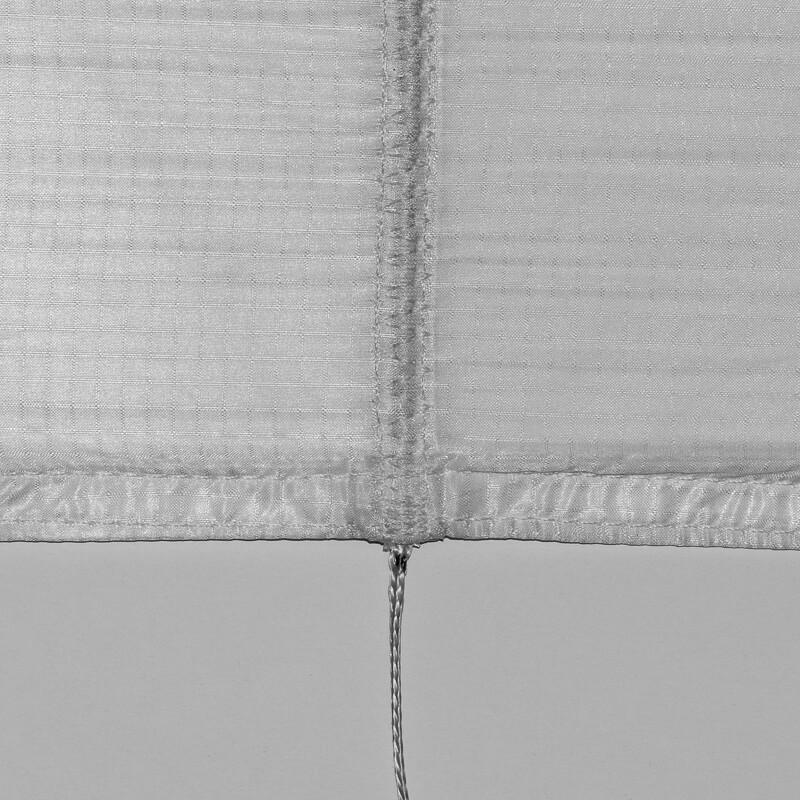 The Bridle is made from 1700kg Dyneema Webbing. The attachment loop is covered with a Teflon sheath, to protect it from dangerous friction which may occur during deployment. 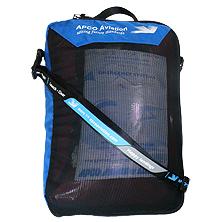 Q: What is the opening time and minimum height for deployment?

A: APCO does not usually advertise this information as it depends on many variables that change in real life situations, and can therefore be very misleading.
According to the certification tests, the opening time is 2.75 seconds. This is measured during a controlled deployment test.
Minimum height – this is not a parameter measured during certification, but according to the opening time (2.75 seconds) – if you calculate falling speed of 16 – 32 m/s (32 m/s is the speed at which the certification test is done), then the min height required for deployment would be 44-88m, however, we advise that if you are in trouble, no matter how low, there is no harm in throwing, we  have witnessed saves at very low altitudes! 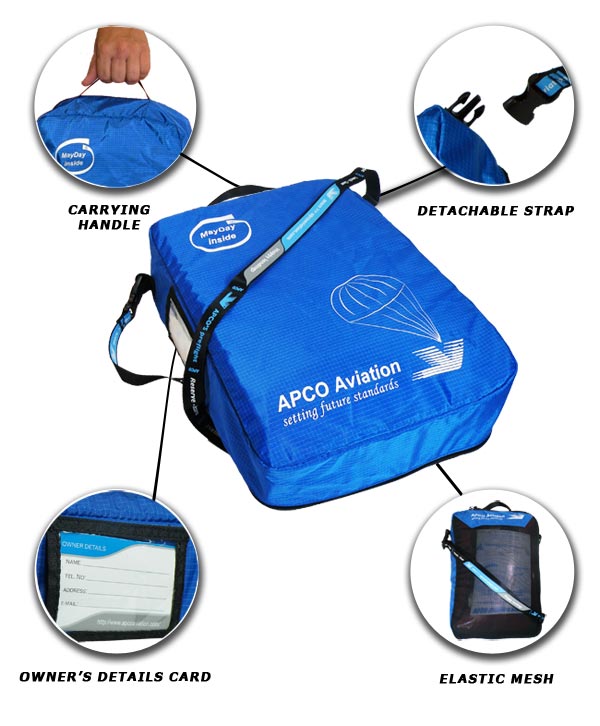