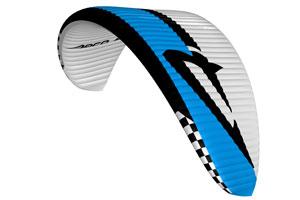 Based on the ground breaking F1, the F3 delivers a similar performance package in a more manageable and easy to fly wing with incomparable safety and stability.
Nicknamed during development “Baby F1” it was conceived out of the success of F1 and shares many of its older brother’s design features.

Situated above the LIFT range and under the F1, the F3 is the perfect upgrade for pilots looking to move up from their school wing.  F3 offers real life cross country capabilities in a package that can supply both speed and high adrenaline fun with its agility and responsiveness.

F3 will be equally enjoyed by advanced pilots, who do not need the cutting edge performance and speed offered by the F1 and enjoy more relaxed cruising around and slower take-off and landings.

The F3 is a very light wing! This contributes to its high level of safety and incredible ease of inflation, especially in nil wind take-offs. The reduced amount of inertia, further improves the passive safety, delivering a safe, solid, no compromise design. The weight saving is smartly achieved using lightweight materials on all internal parts and bottom surface, but retaining APCO’s legendary long-lasting fabric on the top surface, insuring the longevity expected from APCO.

As with the F1, incorporated into the F3 is our Flow Aligned Ribs (FAR) feature, morphing direction from center to tip, it aligns the ribs with the natural direction of the flow, increasing both performance and stability throughout the speed range. The roll stability of the F3 is especially impressive, allowing for agile, precise handling.

The canopy incorporates 2 functional “3D cuts” for the best possible leading edge shape definition.
F3 sail tension has been optimized to be a homogeneous unit, solid and reassuring in flight.

The riser / speed system / trim system was re-designed to incorporate all of Apco’s groundbreaking technologies, and has a greater usable range than any wing we have built before. The extensive speed range means you can launch and land at reasonable speeds, but can accelerate (speeds of up to 69 [km/hour]) with comfort during competition, or on the perfect long distance XC flight you’ve been dreaming about.

With the trimmers closed, the F3 will thermal well, and has exceptional glide ratio (for a full reflex profile wing), so if you like to mix it up on a good day, idle or cut the motor and crank it up to cloudbase with ease.

Open the trimmers and enjoy a significant speed increase of approx. 10 [km/h] (without the use of the speed bar).
Choose the speed bar and the OAA system will allow you to accelerate to the maximum in one swift motion!

F3 – Free your mind and the rest will follow……. 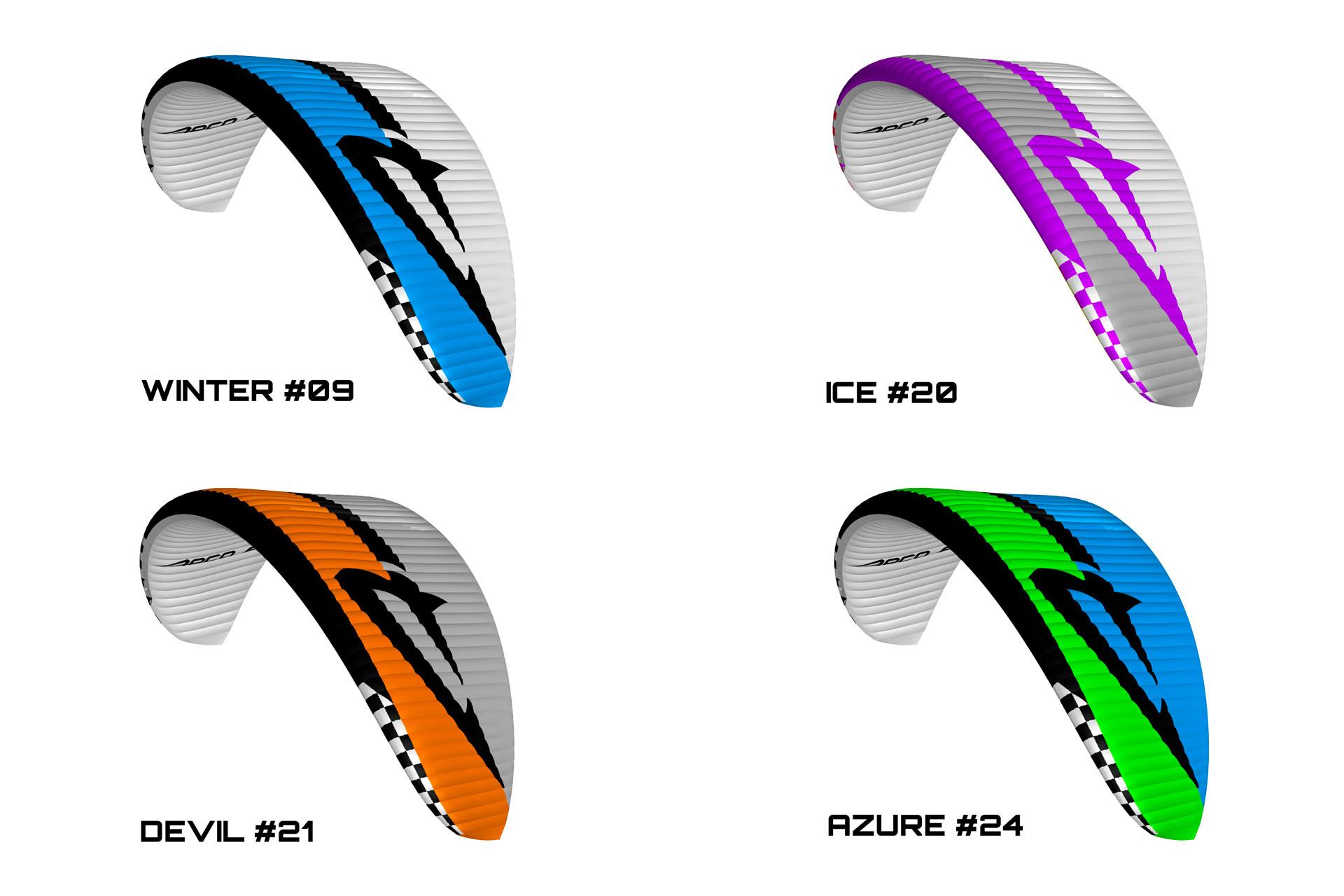 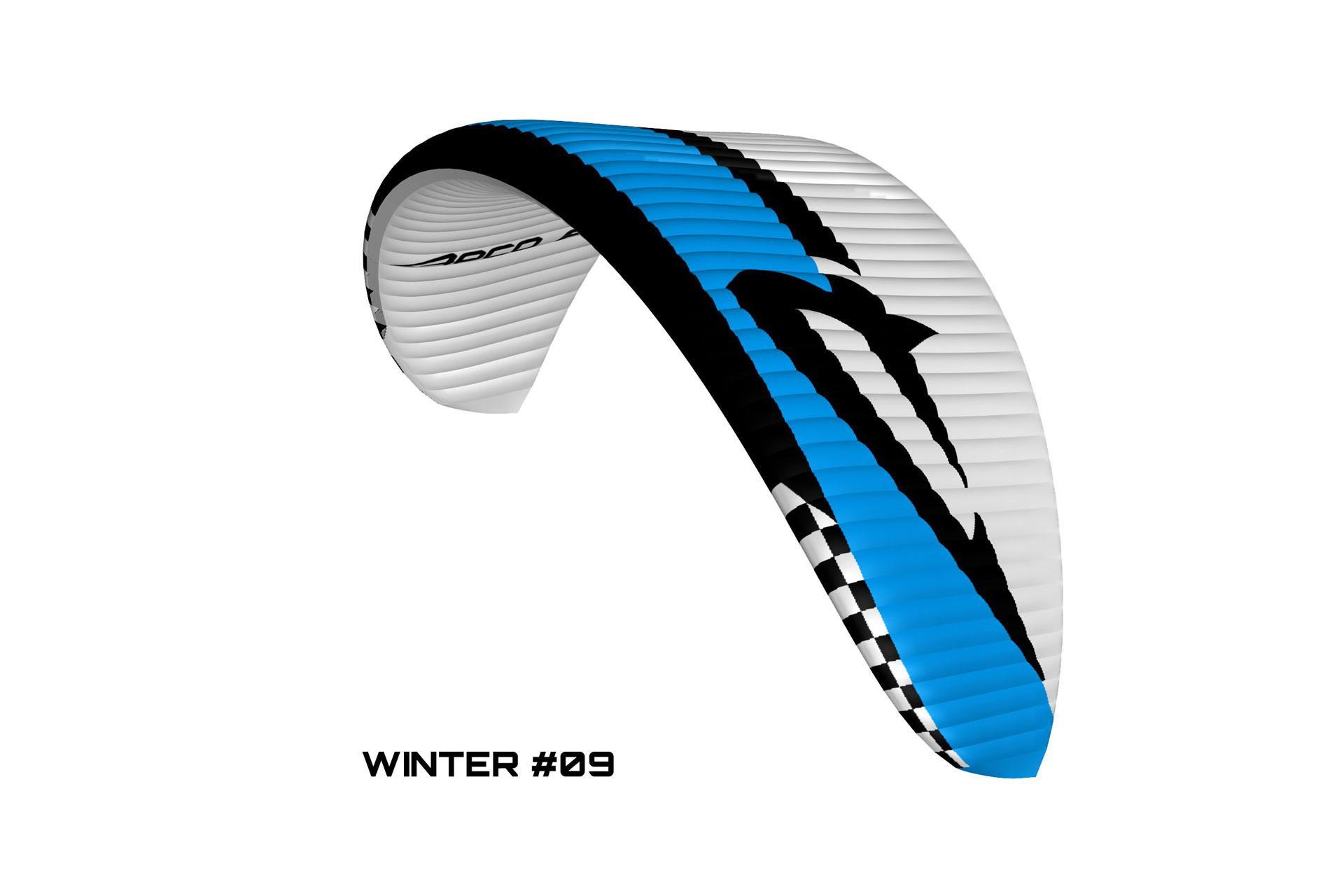 The F3 is available in 4 standard colours – WINTER #09 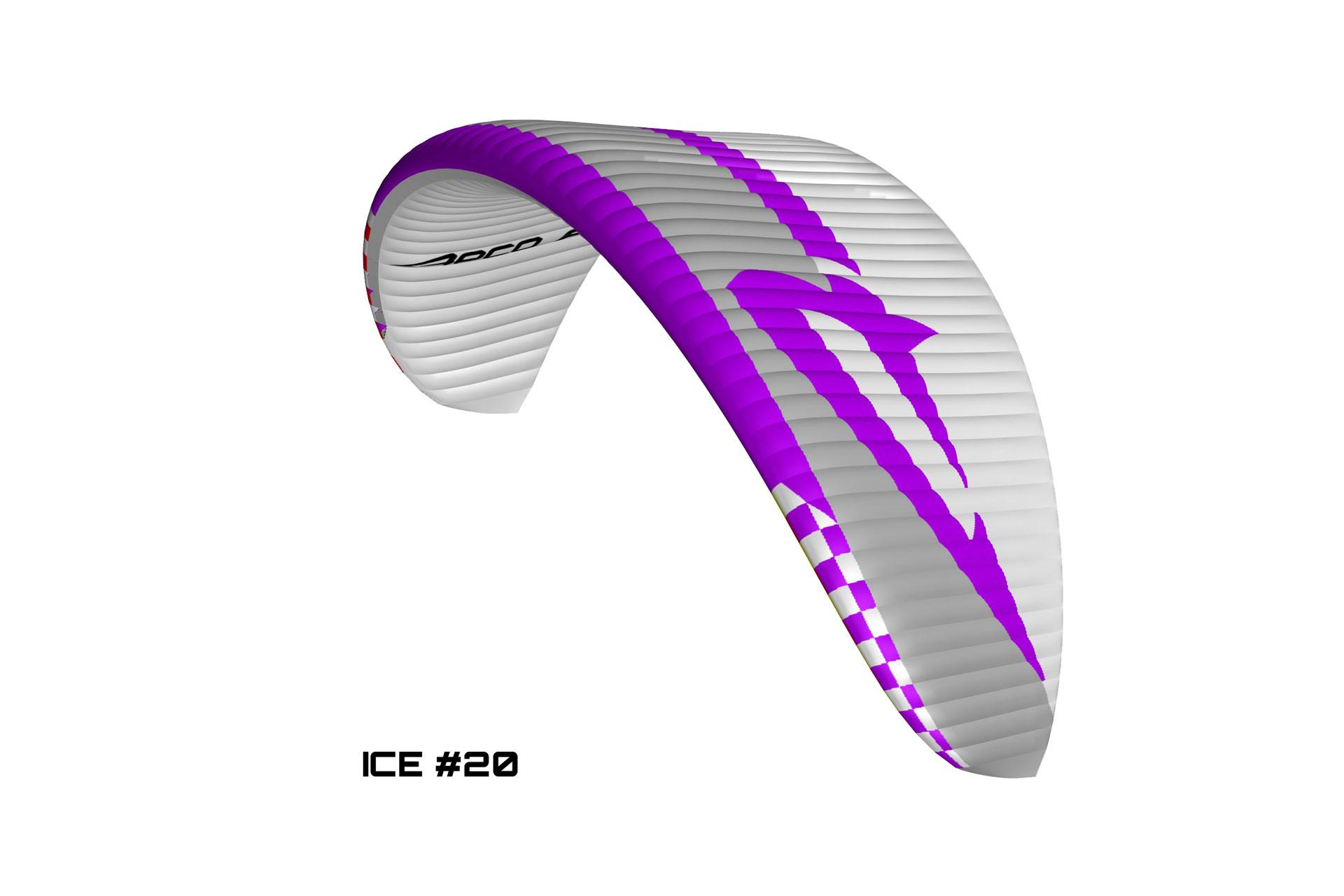 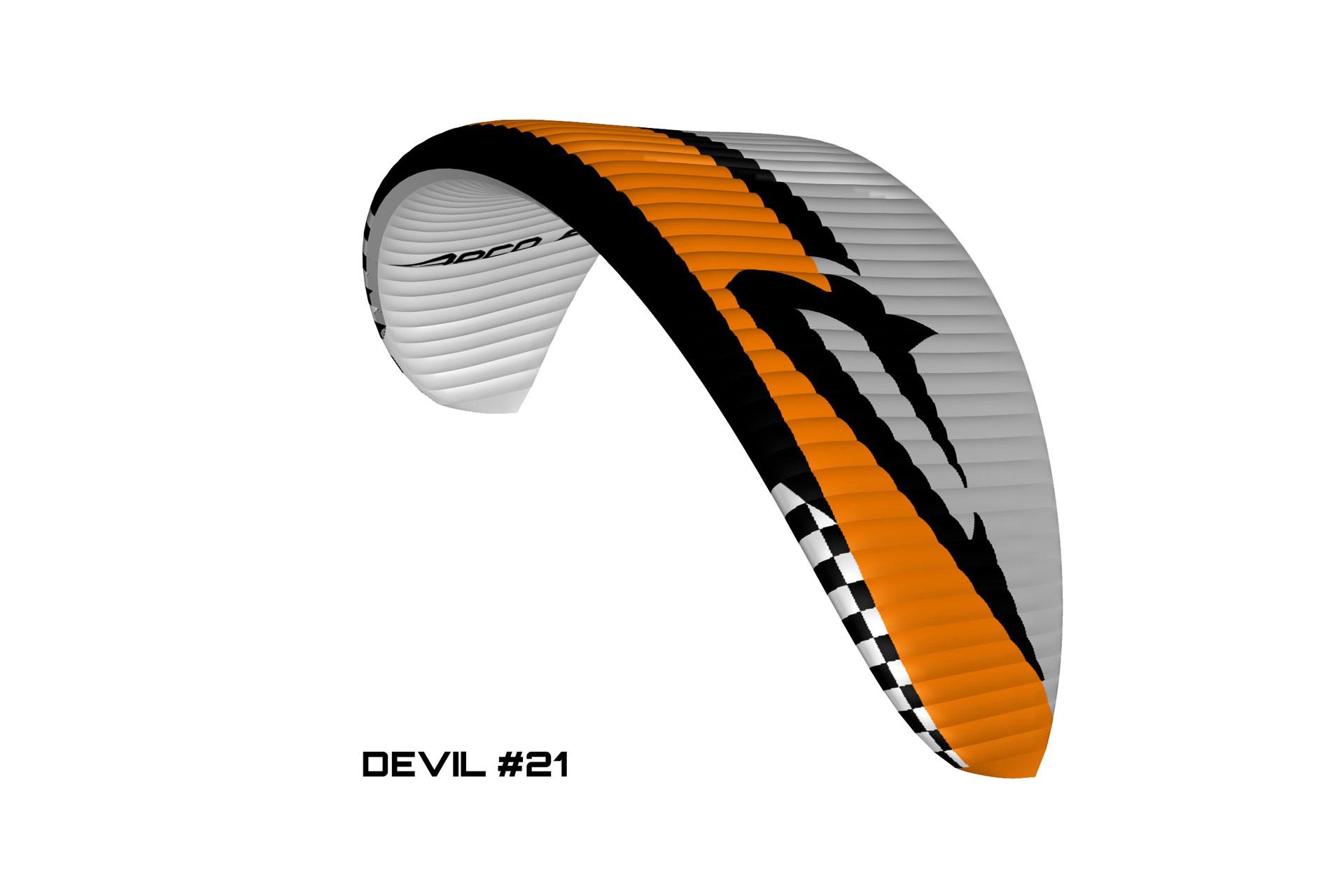 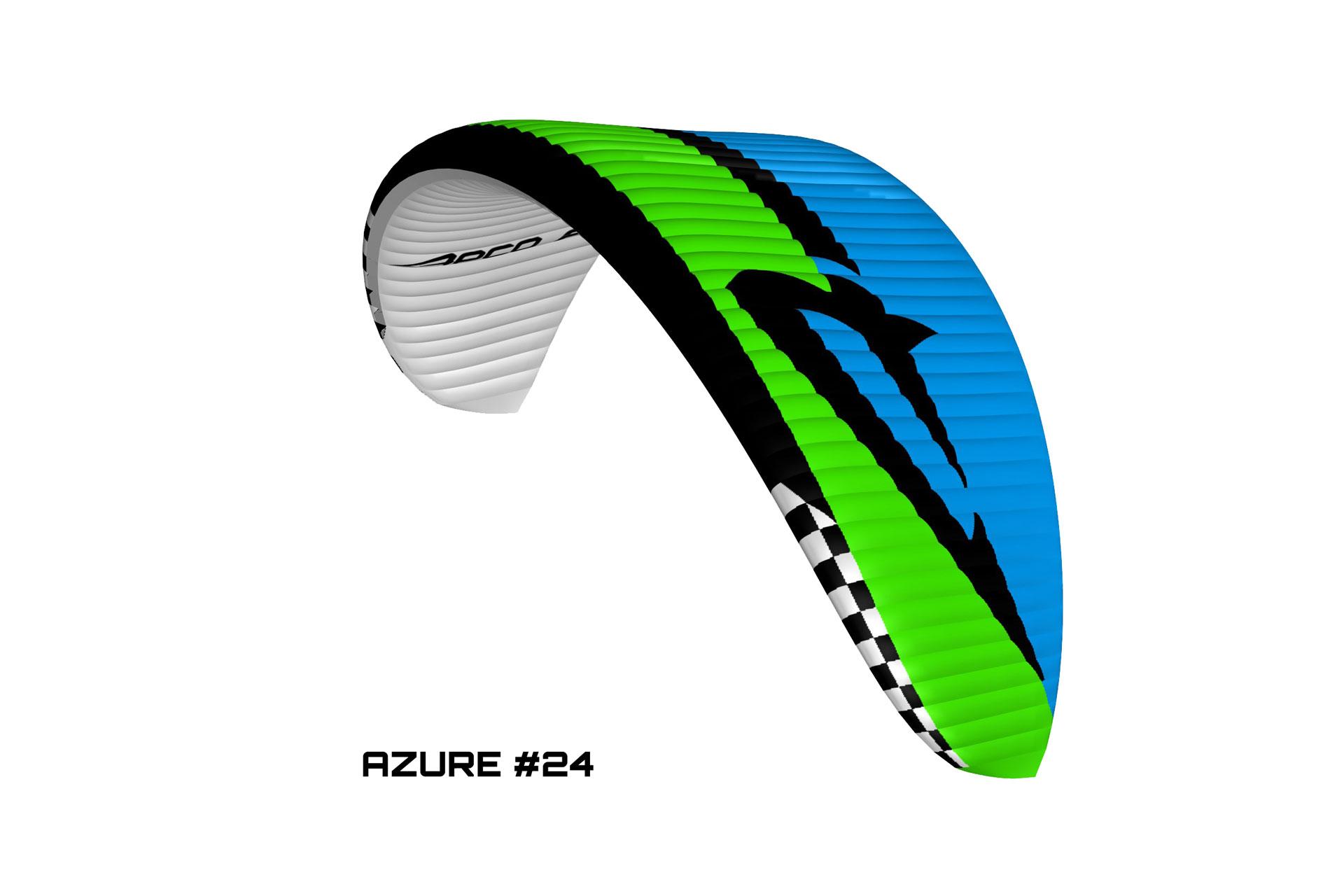 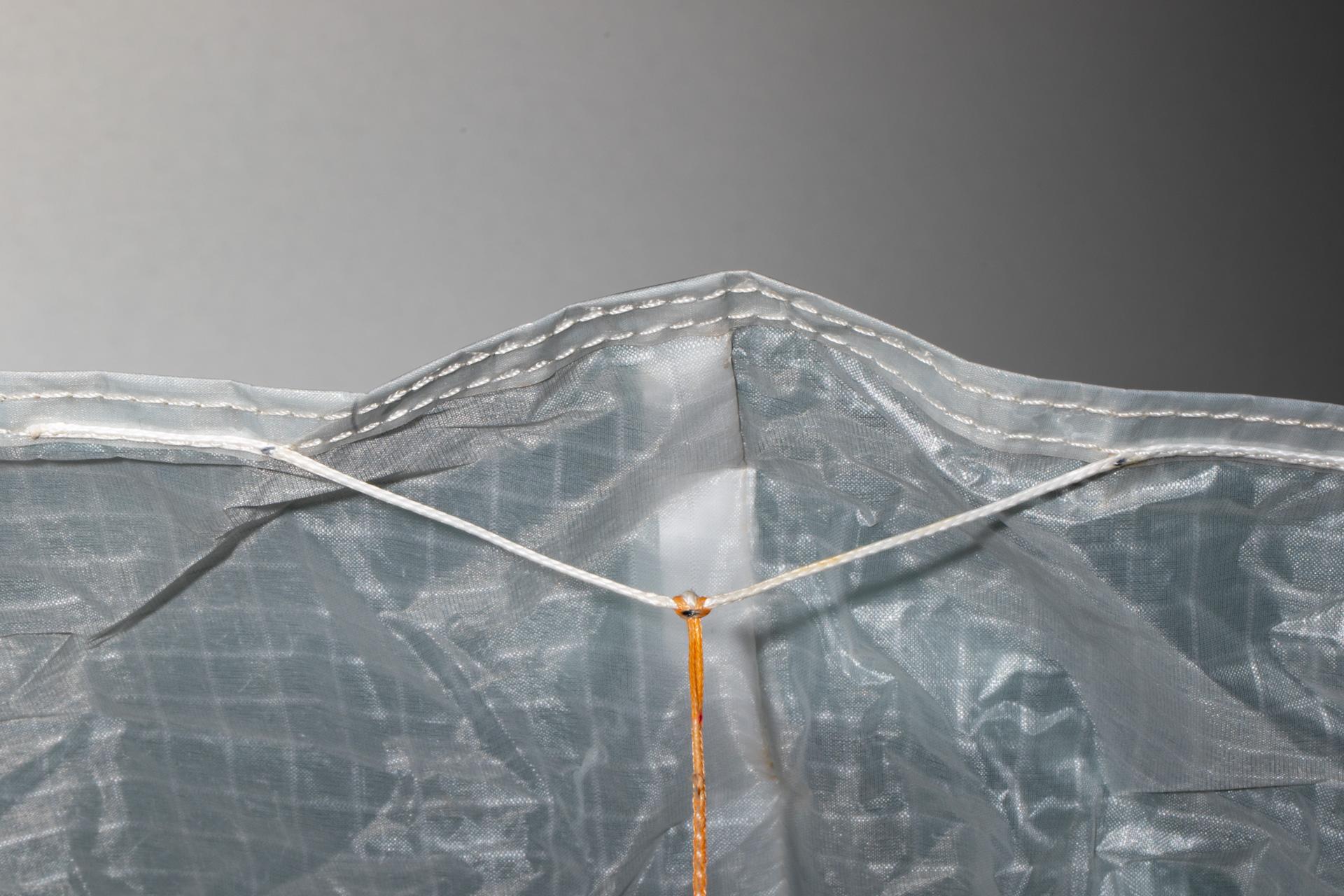 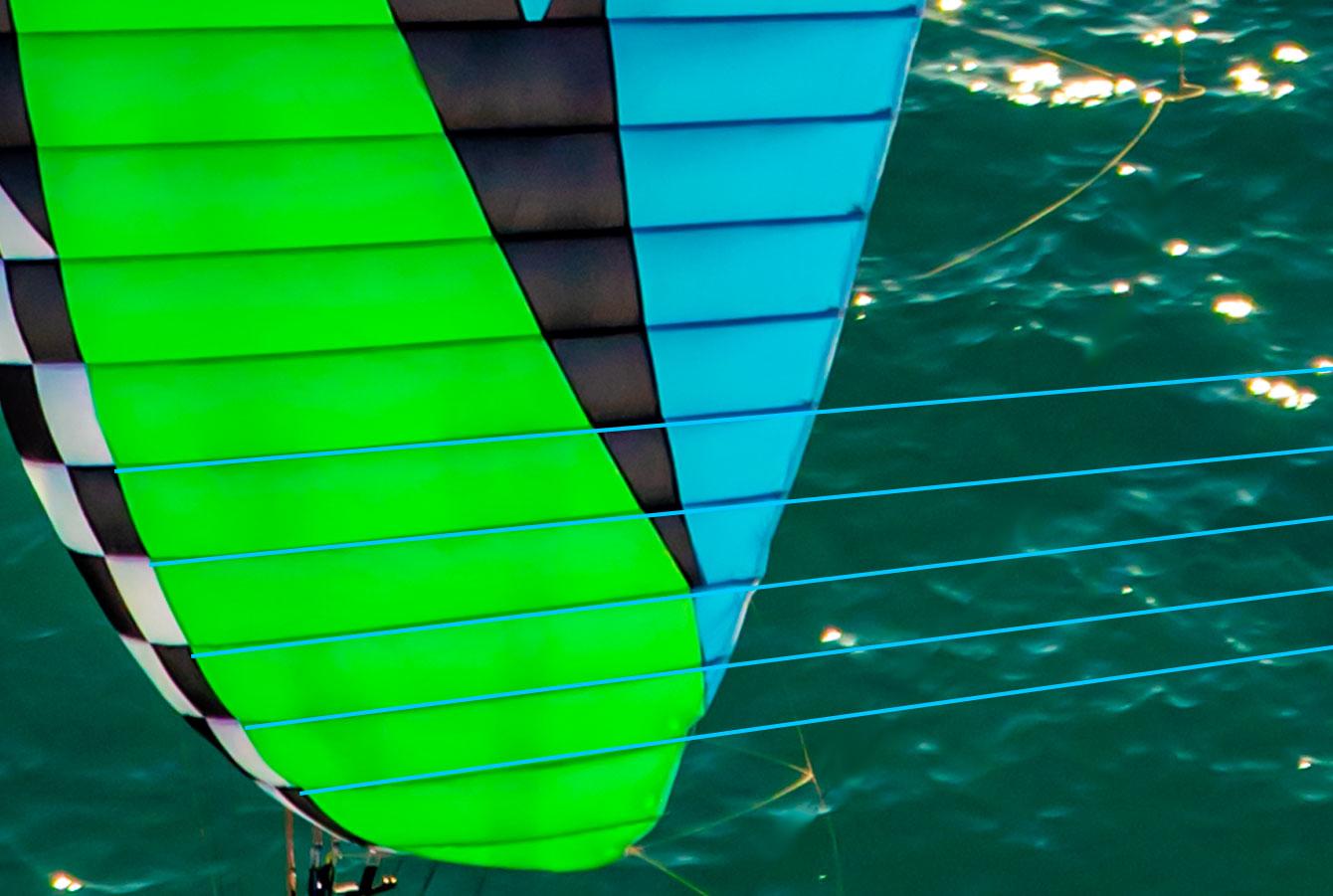 Flow Aligned Ribs
Aligning the ribs to the natural direction of the airflow, allows for a dramatic reduction in parasitic drag and improved lift. 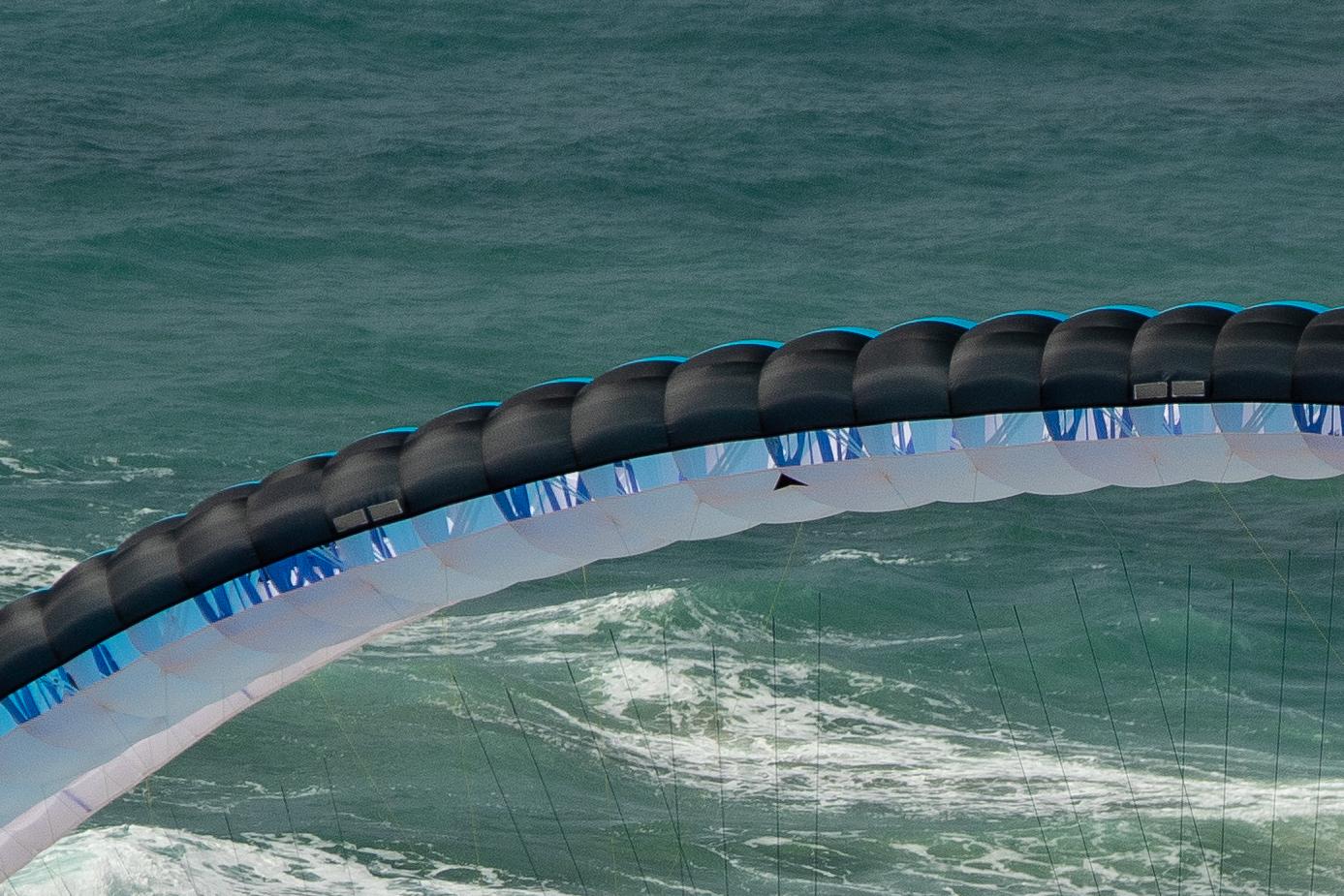 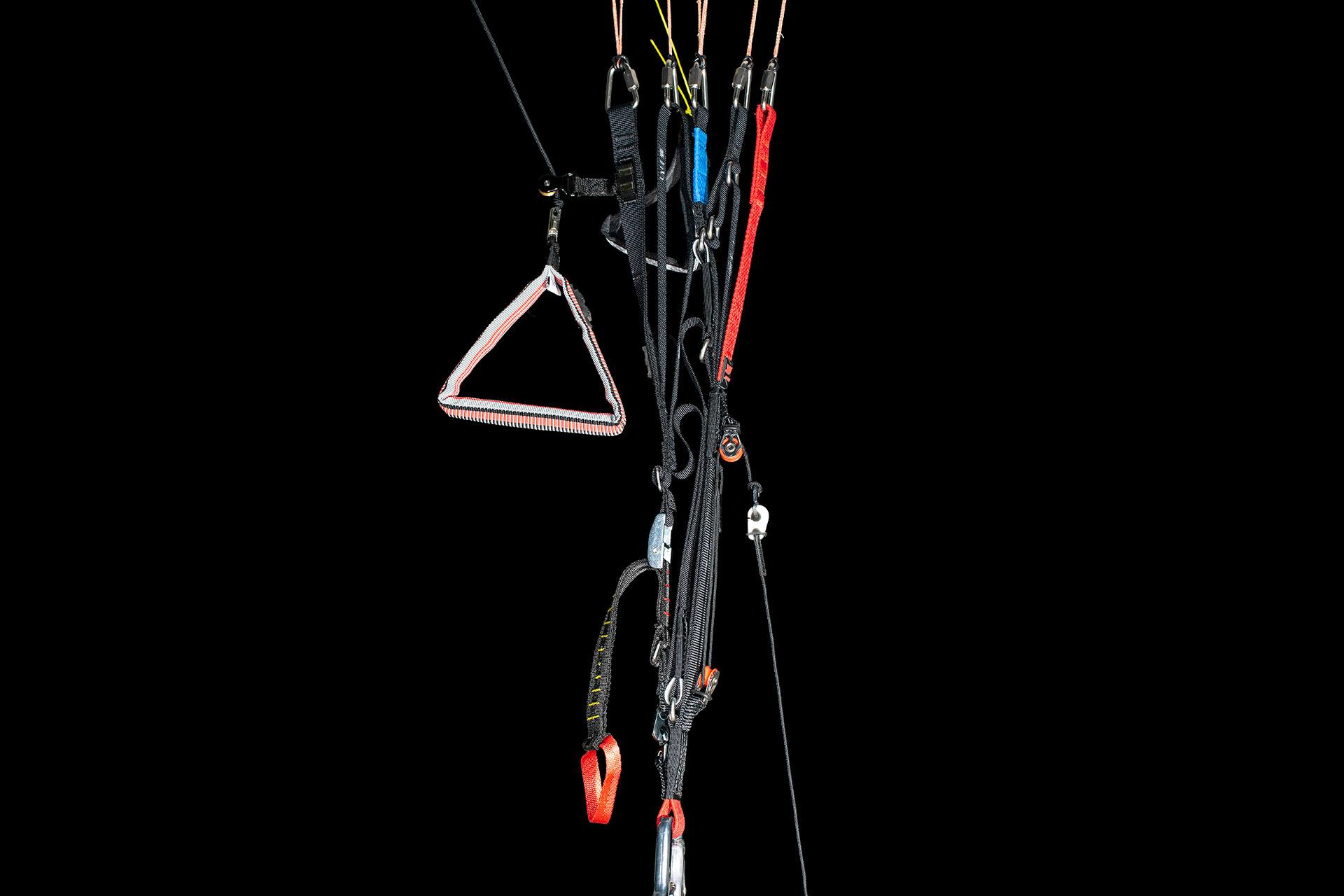 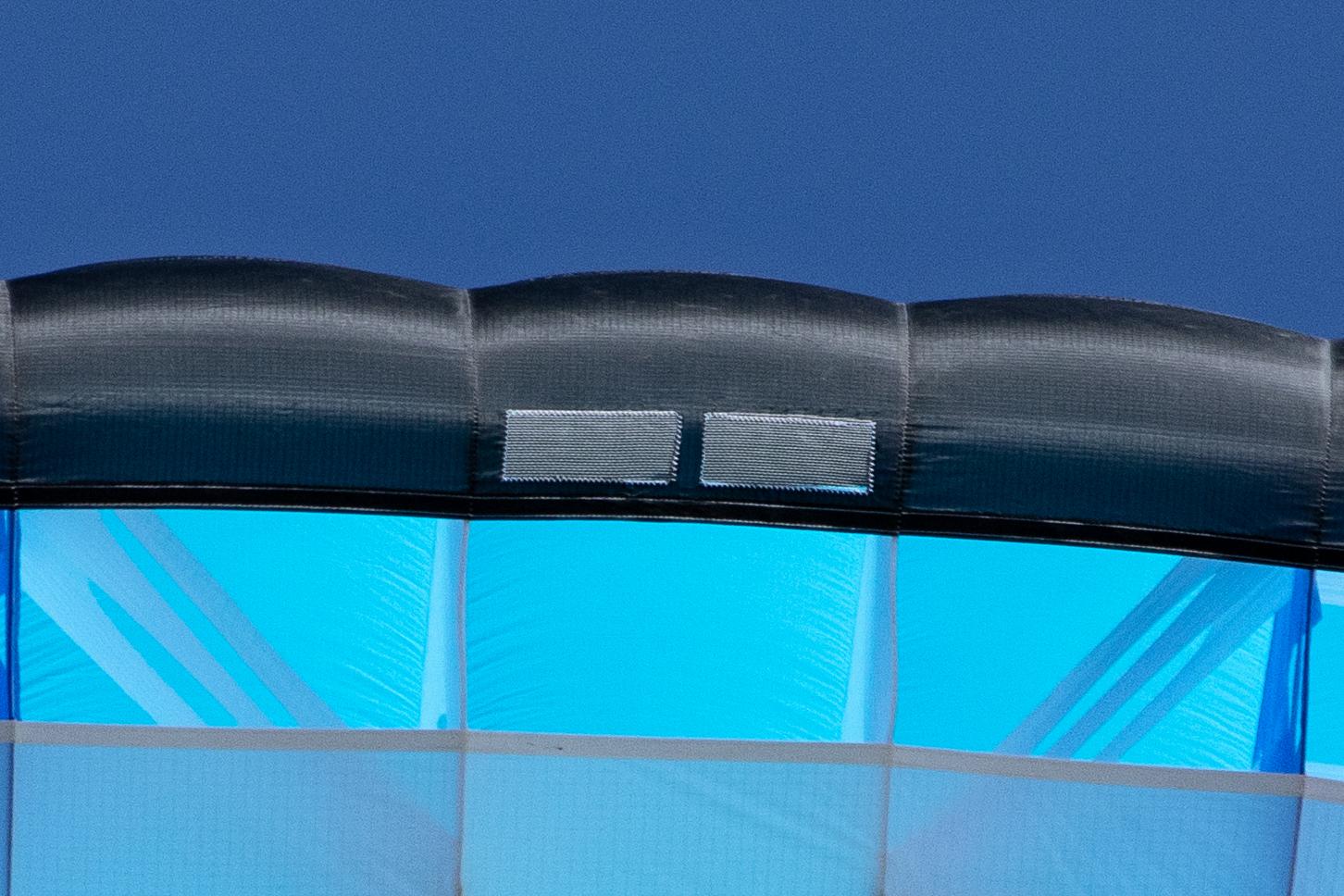 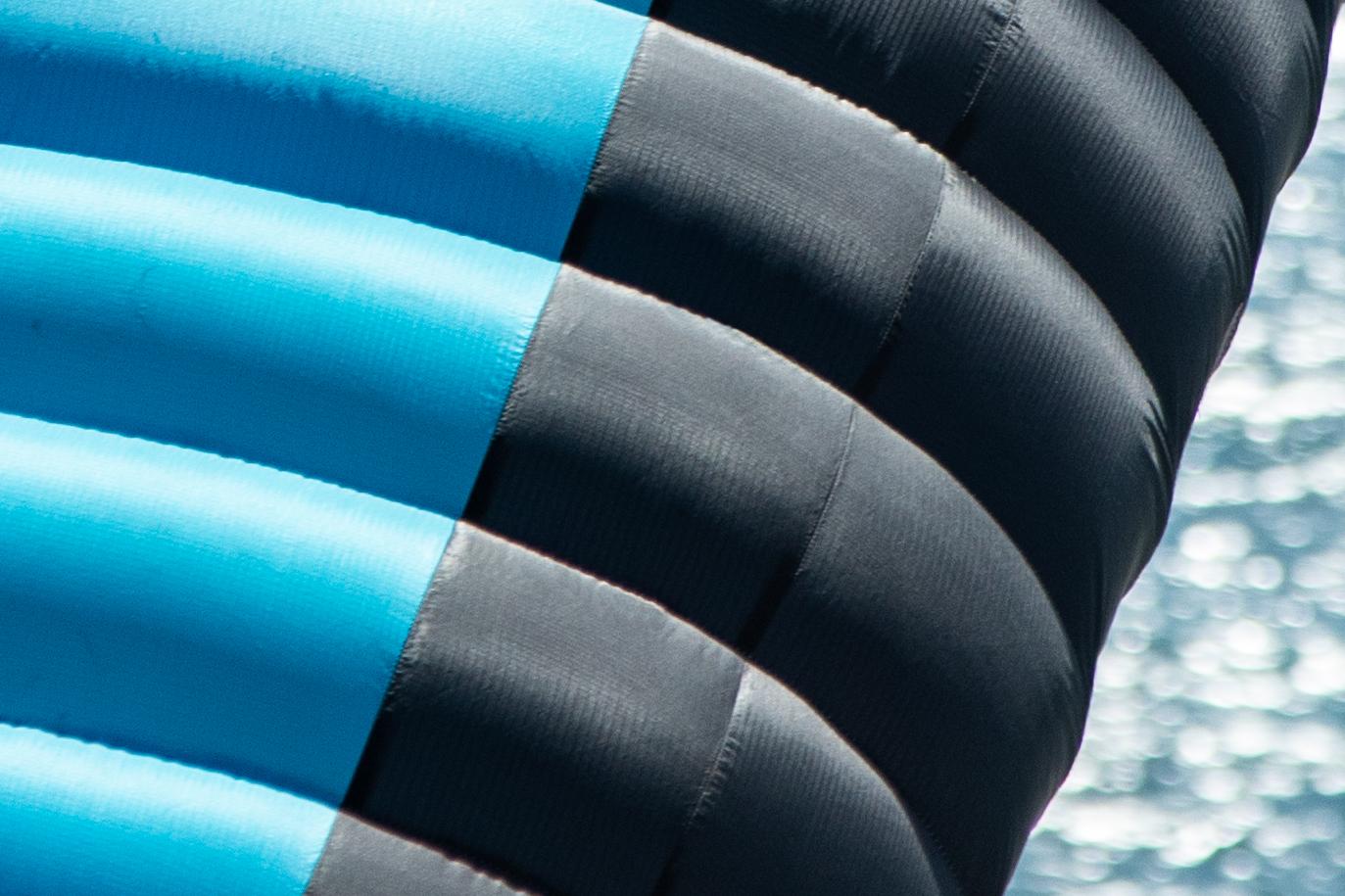 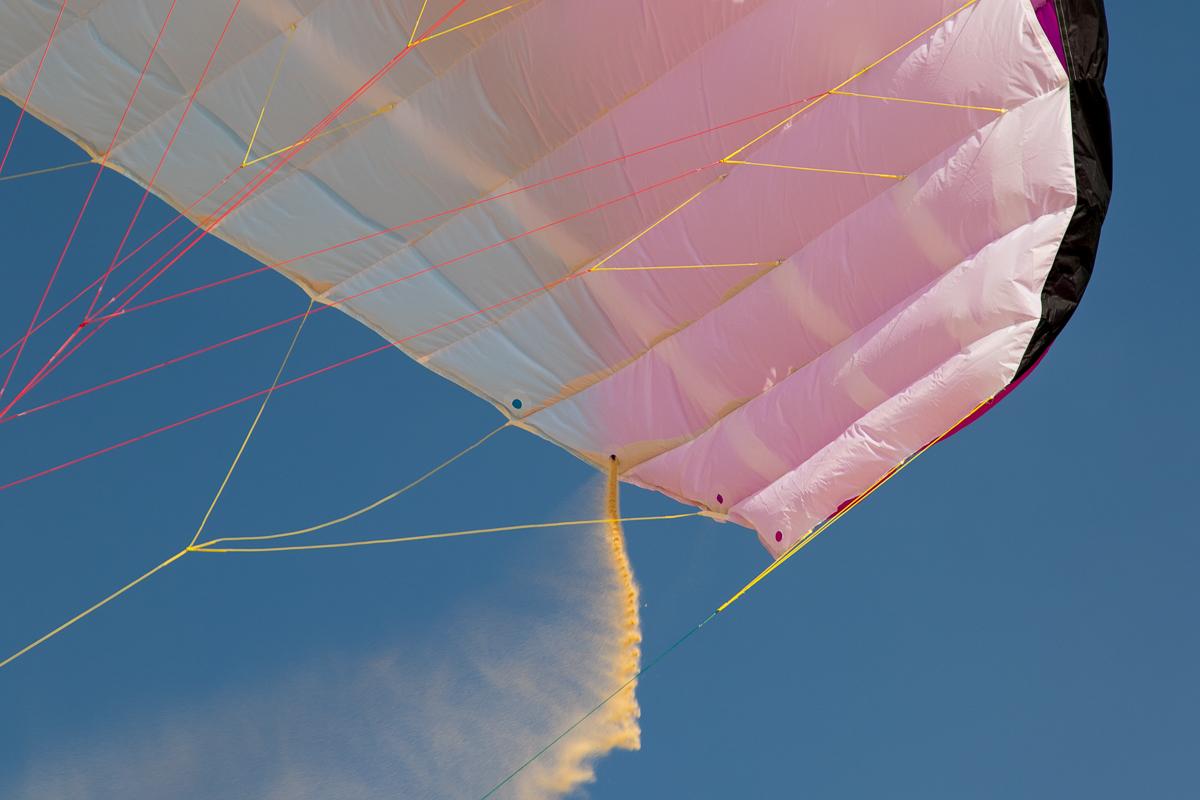 As on all APCO wings, the F3 wing uses the same long lasting cloth on top surface, guaranteeing its integrity for entire expanded lifespan of the wing. Nevertheless we significantly reduced the weight of the wing thanks to advanced solutions applied, without compromising on any of APCO’s legendary durability.

The top surface utilizes our double siliconized cloth  – top front is critical area in terms of porosity as this is where most of the lift is generated.

The bottom surface has been upgraded to a lightweight 27 gr. material with an advanced ripstop arrangement which saves additional weight.

The lines are a mix of different materials in different positions, to optimize to the fullest the diameter/strength according to the required load.
The top lines are our life-time warranted embedded hook in points made from Dyneema fiber.
The rest of the lines are sheathed for extra durability and ease of use. Material used is Kevlar for its stability and resistance to elastic changes in length.
The bottom section of the brake lines is made of Dyneema because of its better mechanical properties. The Karabiners that attach the lines to the risers are made of stainless steel. 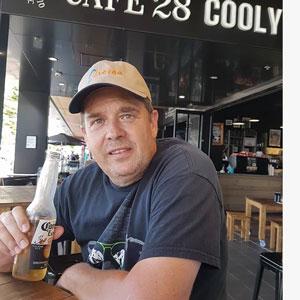 Just flew the new 26m F3 for the first time this weekend. What a wing! I came off a Lift EZ and was right at home on the F3. I was ready to run for my life on take-off, and was flying before I knew it! Heaps of lift on landing. My flying weight is around 140kg. Wing is very responsive in flight, just what I was looking for.
Thanks APCO!
NS: Apco, I can only suggest to make a bigger deal of this wing in the media and your website – It just turned up in the lineup one day… I think this wing deserves a bit of fanfare! 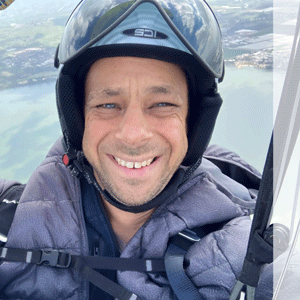 The team at Apco nailed it with a well refined wing that is fast, nimble, and really fun to fly. The F3 will inspire pilots to expand their limits for years to come. 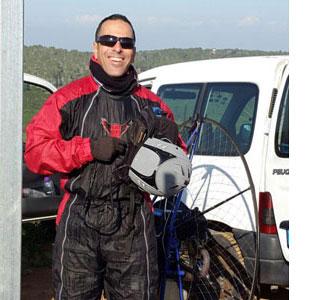 I’ve been flying the F1 since it was released, and I love its speed and performance! But, now that the F3 is out, I tried it and will get one – its just more relaxing all round, lower takeoff and landing speeds, but still has the great performance, and speed when needed. It will be my wing of choice when mine arrives.

The F3 delivered what I was promised! That light weight thing pops in the air just by thinking about it. Rock solid and stable when I wanted it and super fast and responsive when pushed to the fun zone. Great takeoffs and landings with that baby! Thumbs up APCO!

What are the differences between the F1, F3, Force and LIFT series?

The F3 is designed to fit between the LIFT Series and the F1, it caters for the same pilot catagory as the Force II, but is by no means a FORCE III.
The F3 improves on the FORCE in every aspect. After Take-off, you will immediately notice the lighter and more responsive handling, greater speed range on the trimmers, and it is more efficient, so you  will climb faster and burn less fuel per hour. It has exceptionally good active and passive safety (See the Safety Testing Video).
Design and construction is based on the F1, so the wing is significantly lighter than the Force II (without compromise on durability), and so, has better inflation in both light and strong conditions.
The Risers are the same as on the F1, tested and proven on the Fast One!

OAA - what trimmer settings should I use?

For Take-off and Landing, we recommend to use the fully closed (Slow) position.
For normal flying, after takeoff, move the trimmer to neutral.
For Cruising, open the trimmers to a comfortable position, stow the main brakes and steer using the tip steering handles – do not use the main brakes in accelerated flight.

From the Manual on OAA “OAA is an innovative system that stands for “One Action Acceleration-system”.
OAA allows experienced pilots to attain the full speed of the glider using the speed bar alone, without the need to release the trimmers.With OAA unlocked, the speed bar simulates, the release of the trimmers according to the position of the speed bar. This allows for a larger speed range that can be fully used in one smooth action of the speed bar to reach the maximum speed of the wing without the need to release the trimmers.
In order to use the OAA one must unlock the Brummel hooks connected to the rear of the risers below the trimmers. Prior to using the speed system, one should move the trimmers to the neutral position, at the blue mark on the trim webbing (all risers will be level in unaccelerated flight).

To Lock the OAA one must lock the Brummel hooks together on the rear riser. Locking / Unlocking is possible in the air, but is best done on the ground.

If Flying with the OAA locked, and you wish to reach the maximum speed, you must release the trimmers to the fully open position before applying the Speed Bar. The required force to apply the Speed Bar will be higher.

In the case of encountering severe turbulence, we suggest landing as soon as possible.

With the OAA Unlocked: We recommend not releasing the trimmers fully and then applying full speed bar. This will not give a greater speed range, and will make recovery from collapses slower. In the event of a collapse with OAA unlocked, or locked with trimmers fully open, release the speed bar (if applied) and use the rear riser for re-inflation rather than the brake.”

The OAA brummel hooks can be managed in the air, just recommended not to adjust close to the ground – pay attention that you have enough altitude (to avoid obstacles and have the time to react for engine failure etc.)

Customise your F3 order with these accessories